The city of Port-au-Prince is on the Gulf of Gonâve: the bay on which the city lies, which acts as a natural harbor, has sustained economic activity since the civilizations of the Arawaks. It was first incorporated under the colonial rule of the French, in 1749, and has been Haiti's largest city since then. The city's layout is similar to that of an amphitheatre; commercial districts are near the water, while residential neighborhoods are located on the hills above. Its population is difficult to ascertain due to the rapid growth of slums in the hillsides above the city; however, recent estimates place the metropolitan area's population at around 3.7 million, nearly half of the country's national population.

Like in Brazil or Italy, the football is the most popular sport in Haiti. Certainly, the national pastime is the football. A different of the Dominican Republic or Puerto Rico, the Haitian people don’t like the baseball. In the 20th Century, football became the most popular sport in the Island, thanks to such heroes as Sylvio Cator, Joseph Gaetjens and Emmanuel Sanon. In 1974 Haiti qualified for the World Cup in Germany.

Emmanuel Sanon was one of the Haiti’s most popular players and played at the 1974 World Cup. Sanon made a great contribution to Haitian football because he played in more World Cup qualifiers any other Haitian. He is still very popular with local fans. Other phenomenal talent was Joseph Eduard Gaetjens. He represented both Haiti and the United States. He made FIFA World Cup History: When scored United States opening goal in the 1950 World Cup against England. Joseph came to the United States in the 1940s to play in the American Soccer League. His beautiful play in the Brookhattan Club made in a national star. In 1953, he played for Haiti for the first time.

It’s practically impossible to talk about Haitian athletes without mentioning Sylvio Cator. He is a legend in this sport. Cator won the silver medal in the long jump at 1928 Amsterdam Olympics. Cator returned home to a hero’s welcome. From 1928 to 1930, he was record man in the long jump. Cator was a marvelous jumper and footballer. He also played an important role in popularizing football in the Island (it was the captain of Haitian National Team). Since then, he is an example for young people in Haiti. He died in November 1938, but today the people of Haiti still think of him with respect. Many years after Cator’s death, the National Stadium in Por-au-Prince was renamed in his honor. Cator was the first of the great Caribbean sportsmen that would come to dominate world track and field.

Another popular destination in the capital is the Hotel Oloffson, a 19th-century gingerbread mansion that was once the private home of two former Haïtian presidents. It has become a popular hub for tourist activity in the central city. The Cathédrale de Port-au-Prince is a famed site of cultural interest and attracts foreign visitors to its Neo-Romantic architectural style.

The Musée d'Art Haïtien du Collège Saint-Pierre contains work from some of the country's most talented artists, and the Musée National is a museum featuring historical artifacts such as King Henri Christophe's actual suicide pistol and a rusty anchor that museum operators claim was salvaged from Christopher Columbus's ship, the Santa María. Other notable cultural sites include the Archives Nationales, the Bibliothèque Nationale (National library) and Expressions Art Gallery. The city is the birthplace of internationally known naïve artist Gesner Abelard, who was associated with the Centre d'Art. 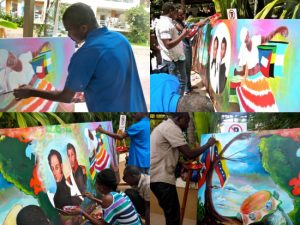